Wow! Thanks to you, the Golden Scroll of Justice is currently the number one best selling product on RPGNow.com.

Thanks, guys and gals. That sort of support means a lot.

The Golden Scroll of Justice lets you bring your old-school RPG into a whole new world of wuxia/kung fu action based on Chinese mythology, history, and folklore. The book contains:

The rules are designed to be completely modular; take what you like, leave what you don’t. Want fangshi and gouren but not the kung fu system? No problem. Everything will still work fine. And it’s compatible with just about every old-school RPG out there. You can find the book here, available in softcover, hardcover, and pdf. And as always, the hard copies come with the pdf version at no additional cost.

And the big announcement concerning the Kickstarter for The Golden Scroll of Justice, my upcoming mythic China/Wuxia sourcebook for old-school RPGs is…

There will be no Kickstarter.

A funny thing happened when I ran the numbers while I was preparing for the Kickstarter of this book. I realized I didn’t need the money to make it happen. Sales of Adventures Dark and Deep and Castle of the Mad Archmage have been good enough that I don’t need to go to the fans beforehand to make the next book happen.

I’m a firm believer that Kickstarter should be used to help create things that could not otherwise be created. Not as a pre-order platform, not to gauge public response to a product. I pride myself that, if I don’t need to go to the Kickstarter well, I don’t go. That’s what I did with the Game Masters Toolkit, and that’s what I’m able to do with Golden Scroll of Justice.

So… the planned release date is still by the end of this year. Hmmm… that’ll be just in time for Christmas. How convenient!

September 7.
Kickstarter news.
I can say no more. 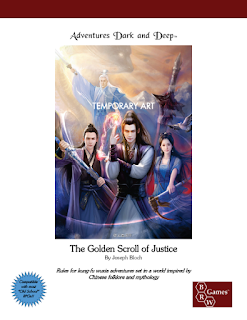 Let the word go forth from this time and place, that I am hereby looking for artists to work on my next project – a book which is a blend of of Mythic China (including Chinese mythology, folk religion, and the like) and classic Wuxia movies. The book will be Kickstarted, and I’m looking for folks with a hole in their schedules for the first part of Q4 of this year.

This bit is important. There will be hard deadlines that must be met in October and November. You’ll get specific assignments in mid-September. If your workload will not allow you to make those deadlines, please do not apply. If you commit to a deadline and fail to meet it, you will not be paid. If I have to do without a piece of art on a page, I will do so, rather than let the project deadline slip.

Sorry to be such a hardass about this, but I need to get this book out in 2015 (which is a must, for tax purposes, if I collect a bunch of money via Kickstarter), so I have to get the books printed in December (again, taxes). That means I’m not waiting for art.

Art will consist mostly of quarter-page b&w line art (3.5″ width, 4.5″ height), and a couple of one-eighth page pieces (3.5″ width, 2.25″ height). There will be no full-page pieces. There will be a single 7″x7″ color cover. Obviously, this being a China-themed book, you’ll be expected to produce figures in Chinese armor and clothing, and etc. Please make sure you know the difference between Chinese and Japanese armor and clothing. No ninjas, no samurai.

Please email me at joseph@brwgames.com if you’re interested, include your rate for a the sizes of art you’re interested in doing (and link to samples of your work, if I haven’t already worked with you in the past), and please feel free to spread this out to all your artsy friends. I’ve got a long way to go before it’s done, but I’ve recently had a spurt of inspiration and energy for my wuxia/Chinese folklore supplement for old-school gaming, and I thought I’d post some of my thoughts on how it’s going to be organized, and what sort of stuff will likely find its way into the book.

First off, it’s completely China-focused. One of the things that was both baffling and annoying about the original Oriental Adventures book was its mish-mashing of Chinese, Japanese, and other Asian material, with a decided focus on the Japanese. There will be neither ninjas nor samurai in this book. That’s not to say it’s an historical game; far from it. But the influences will come solely from China.

Secondly, it draws inspiration from two sources; wuxia film and literature, and traditional Chinese mythology and folklore. In the same way that Gary Gygax took inspiration from European and Biblical folklore and literature for a lot of spells, magic items, and character classes, this book will draw from Chinese mythology and folklore. I’m also adding in a healthy dose of wuxia tropes and themes, most specifically in the introduction of rules for kung fu. 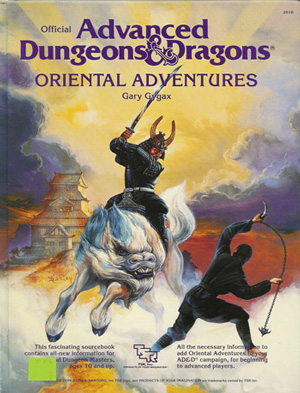 Building on a mechanic of the core Adventures Dark and Deep rules before it, this Chinese supplement will treat kung fu abilities as secondary skills (which in turn were inspired by Gary Gygax’s rules for skills written for the Castles and Crusades game), kung fu skills are learned in three stages. Each stage costs a set amount of experience points per level, with the amount of xp required decreasing if your character’s highest attribute is relevant to the skill in question. Once you “spend” the xp to learn that level of a particular kung fu style, they’re forever lost, but you can of course earn more xp to replace them. Spending them does require that the character find a teacher that is both able and willing to instruct the PC, naturally. Monks, by their nature, start off with a level in one kung fu style.

To take one example, “Dragon Foot Style” allows characters to kick enemies back one foot per point of strength, and gain damage bonuses if using pummeling to kick, plus other bonuses as they buy new levels in it. A lot of the kung fu rules lean heavily on unarmed combat (naturally), and the Adventures Dark and Deep unarmed combat rules, which I think are a lot easier than those in 1st edition, will be included as an appendix. Other styles allow characters to fight blind, do backflips to get behind enemies, and even levitate and climb walls. It’s intended to really capture some of the cool moves featured in some wuxia films.

The traditional “Tolkienesque” fantasy races don’t feature prominently in a mythic China setting, but two new races are included; shanxiao (monkey-men) and gou ren (dog-headed people). Every character class is covered, even if it’s a perfunctory “this class doesn’t exist in a mythic China setting”, such as paladins and druids. New classes include monks, wu (shamans, a sub-class of cleric), and fangshi (a sub-class of mage). Naturally there are tons of new spells for both classes.

So far, I’ve got 67 new spells (plus all the original spells that the wu and fangshi can also cast), 43 new magic items, and 85 new monsters, including the various sorts of elementals (including meta- and quasi-elementals) that one would naturally expect when one adds elemental planes of metal and wood. All that from just reading books on Chinese folklore. Naturally, there will be entries for Chinese-style weapons and armor, and everything will be fully compatible with Adventures Dark and Deep, and, by extension, most old-school RPGs (with maybe a few tweaks here and there for some rules).

All in all, I’m really pleased with the way the book is going. It seems new to me, and it’s definitely a change from the Japan-centric “oriental adventures” books that have come before. There will probably be a Kickstarter at some point to pay for art and editing, once the text is done. I’ll keep you posted.