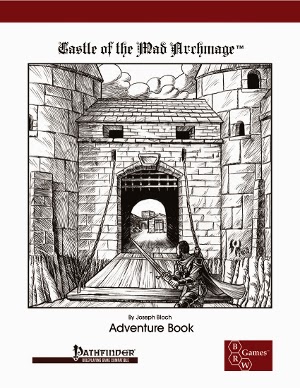 The Castle of the Mad Archmage is designed as an old-fashioned “funhouse” megadungeon, with tricks and traps, many different factions of monsters, and can provide literally years of mayhem, dismemberment, and other fun.

The adventure is comprised of three books; the Adventure Book, the Map Book, and an Illustration Book with pictures to show your players what they see at key and interesting points in the dungeon (due to a limitation of the RPGNow site, you must add all three of these books to your cart separately).

Anyone notice anything different about the cover? 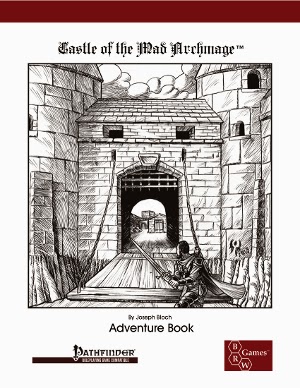 A lot has changed since the last update on upcoming projects, and I wanted to let everyone know where things stand. Here’s the current plan for 2014, but as Haviland Tuf once sagely observed, “It is in the nature of plans to change.”

The Castle of the Mad Archmage™ is right on schedule to be released by February, using the Adventures Dark and Deep™ rules, but usable with most Old School rules. This will be followed by a Pathfinder edition, probably by June, but exact date TBD. Will we see any expansion levels?

The biggest change is that the World of Erseta™ Fantasy Setting is on indefinite hold. I have determined that the world just doesn’t need yet another European medievalesque fantasy setting. That said…

Along with that will be a setting suitable for play with such rules, fabled Cathai™. More details to come, but the setting will not be tied to the rules. You’ll be able to have your kung fu  adventures in whatever setting you prefer, and you’ll absolutely be able to mix and match your regular mages, fighters, and thieves with their more Eastern counterparts.

Finally, I am really hoping to crank out Adventures Great and Glorious™ in 2014, which will be a rules supplement covering political intrigue, large-scale warfare, long-term campaigning (rules for stretching play out with “campaign turns”, children, and the like), and domain-level rulership. That’s been simmering on the back burner for a while now.

Sounds like a lot, doesn’t it? Well, I managed to get all three Adventures Dark and Deep™ books out in 2013. Maybe I can get four big projects out in 2014. If not, AGG can always wait until 2015. After all, “it is in the nature of plans to change.”