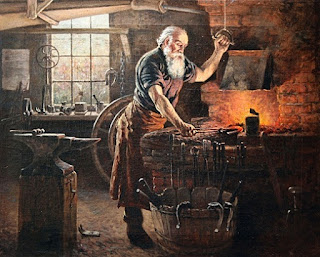 One thing that I’m discovering as I’m writing the Mythic China/wuxia book is just how flexible and powerful the secondary skills are. As they appear in Adventures Dark and Deep, they’re an expansion of the skill system that Gygax wrote for the Castles & Crusades game (specifically for use with his Castle Zagyg project), specifying relevant attributes rather than relying on “prime attributes” (which ADD doesn’t have), and dropping the categorization in favor of specifying an x.p. cost for each skill. In ADD, if your character’s highest attribute isn’t the relevant one for that skill, it’ll cost more x.p. to pick up a skill level.

The system works in general by saying, when you earn experience points, you have the option of spending them on learning a new secondary skill, rather than earning a new experience level. Once spent, those x.p. are lost, although a character can of course re-earn them in the normal fashion.

Adventures Dark and Deep uses this system to not only give a set of generalized skills that might be useful for adventurers, but also as a means to convert specialists such as blacksmiths, sages, etc. into game mechanics which suddenly become available to player characters, if they wish to spend the x.p. Some character classes, like the savant, automatically begin the game with a secondary skill (scholarship, which is based off the old AD&D sage rules).

In practice, the skill system works sort of like the 3E system of “taking a level in another class”, except the skills are very micro-targeted, rather than giving the character all the benefits of a multi-classed character. Advancement in the secondary skill is also optional; you can spend the x.p. to gain a skill level in espionage, but nothing says you need to spend more (twice more; x.p. costs are per skill level) to get a second level.

In the new Mythic China/Wuxia rulebook, I’m taking this to a whole other level. While there are, naturally, new secondary skills that are appropriate for a Chinese-based setting, the system as a whole is the basis of the new kung fu rules.

You want to learn kung fu? You spend x.p. to learn a particular style, and you’ll get access to benefits in combat, some of which require a skill check (based on the relevant attribute), and some that just give you an automatic bonus in combat. You want to get better at a particular style, and learn new moves that open up new possibilities? Just spend the x.p. Oh, and find a teacher willing and able to instruct you in the new moves… 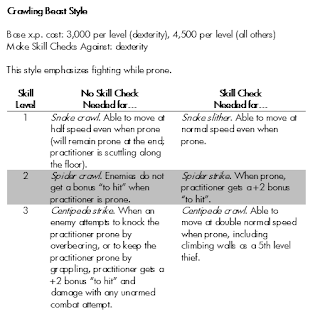 I think this is incredibly elegant, and really demonstrates the power of Gygax’s original system, if taken to its logical conclusion. Kung fu moves don’t “stack”, unless you spend yet more x.p. to learn Kung Fu Mastery, which allows you to combine certain types of bonuses, so the risk of someone becoming some unbeatable killing machine is somewhat mitigated by both the need of spending extra x.p., as well as the specific restrictions. But the system in general allows you to recreate many of the really cool martial arts skills that you’ve seen in the movies, if you’re willing to forego advancing in level to be able to levitate or jump backwards over an enemy to strike him from behind.

It’s like feats, but fitted into a 1st edition aesthetic. And damn, it really works well.

Working on this book has really opened my eyes to the possibilities of the secondary skill system in Adventures Dark and Deep, and I daresay its one of the several things that really makes this game stand out in the pack of retro-clones.

Rather than needing to create an entire sub-class for some specific function in a particular setting, a GM could simply create an appropriate secondary skill and decree that members of the Royal Guard in his setting need to learn it. In that instant, he has created not only a mechanical device to add distinction to the royal guards (who might be experts in the use of the one-handed halberd, or whatever), as well as providing an in-game roleplaying mechanism (you can’t learn the skill unless you can find a teacher, and you can’t become a member of the King’s Guard without it, so you better find a way to learn it from someone if that’s your character’s ultimate dream). I could see race-specific skills, too, being defining traits of sub-races and the like. It’s really a powerful system, and it really works smoothly.