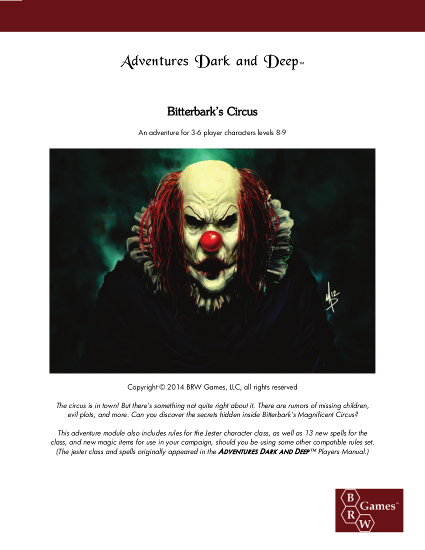 Hot on the heels of the best-selling Adventures Dark and Deep™ GM’s Screen, BRW Games is proud to announce the release of Bitterbark’s Circus, an adventure locale designed for characters level 8-9.

Because it’s written for the Adventures Dark and Deep™ rules, it can be used with most Basic or Advanced-compatible rules almost as-is. And for those people who are playing games that don’t feature a jester character class, the entire class (including lots of new spells) is included as an appendix. Jesters feature prominently in the adventure, and it only seemed fair to include the whole class for GMs who want to use the adventure using other rules.

Bitterbark’s Circus describes a sinister circus which can be inserted into most RPG campaigns with little effort. The GM is given a variety of different ideas and options for inserting the adventure into an existing campaign, and the adventure is also linked to the Castle of the Mad Archmage™ megadungeon, via a magical gate in the lower levels of the fabled and deadly dungeon. But it is also perfectly fine as a stand-alone adventure, and can add a layer of creepy mystery to any game.

The adventure runs 30 pages and is available for $4.95 in pdf format. Buy it today; your players will thank you. Well, probably not, because it’s an eerie and deadly place, but they’ll still have fun.

Posted in Adventures Dark and Deep.