From OneBookShelf (the owners of both RPGNow and DriveThruRPG):

Starting in February 2019, all elements of the RPGNow tool pages and storefront will redirect to similar pages on DriveThruRPG.

You most likely know this, but since RPGNow and DriveThruRPG first merged as businesses back in 2006, they have shared all the same tools and digital inventory. On the front end, they looked and behaved like two separate sites, but essentially they have just been two faces of the same site for many years. The only real differences were the color schemes and logos.

You might have some questions about the coming change, so we’ve done our best to anticipate and answer them below.

How will this affect me?

In most ways, you’ll be unaffected. Your entire catalog of titles from RPGNow is already listed on DriveThruRPG (as it always has been), and you can log in to DriveThruRPG using the same account(s) you’ve always used on RPGNow, just as you could before.

Even your old bookmarks to pages on RPGNow.com will still work: They’ll automatically be redirected to the same page on DriveThruRPG.

What about sales reporting? Will my past sales be combined?

Yes, as far as sales records and your titles’ metal rankings, we will be merging those together.

Starting in February, your sales records will show combined sales of each title across both the deprecated RPGNow site and DriveThruRPG, together. The number of unit sales will also be combined, so if you had metal rankings for titles on one or both sites, there’s a good chance you’ll find that your rankings on some titles will have increased on DriveThruRPG.

What about my Publisher Promotion Points and marketing impressions?

No worries. Your Publisher Promotion Points (PPP) are already shared across sister sites. They are compiled by publisher, not by site.

If you have used your PPP to purchase site impressions for banners or featured product messages on RPGNow, you will also be reimbursed, commensurately, for those expenditures on DriveThruRPG.

Why is this happening?

Here’s the big picture: In the 12 years since RPGNow and DriveThruRPG merged, the growth of RPGNow has tapered off constantly, while DriveThruRPG has continued to grow strongly, year over year, since it launched in 2004. We’ve reached the point where RPGNow rarely draws new customers or publishers and sells less than one-tenth the volume of titles purchased on DriveThruRPG.

To be honest, we have known this moment would come for years now. We’ve just finally decided it’s time to put the RPGNow brand out to pasture.

Although BRW Games has routinely done most of its work through the RPGNow branded site, our operations will be uninterrupted by this change. You might see complimentary PDF and our very rare marketing and sales emails coming from the other domain now, but that’s about it.

Between now and Halloween, everyone who has previously purchased the Adventures Dark and Deep Players Manual in any format, can get a hardcover version for 20% off. This is your chance to upgrade from a pdf or softcover version for a nice discount.

Emails containing the special discount link are going out right now. If you don’t see it in your inbox, be sure to check your spam folder. If you still don’t see it, you’ve probably turned off getting promotional mail from RPGNow.

OneBookShelf is running its annual “Christmas in July” sale, and naturally BRW Games is participating. That means you can get everything in the BRW catalog at deep discounts:

Click here to see the whole kit and kaboodle.

What’s that? You want specifics? Well, roll these around your brain and see if it doesn’t scream BUY ME!!!

The original Castle of the Mad Archmage, in print, no less, for under $45. Yes, that includes both print and pdf! Seriously, you could literally spend years with your players in this dungeon. 13+ levels, thousands of encounter areas, new monsters, new magic, the thing is effing HUGE.

Not enough? How about this…

The Adventures Dark and Deep core rulebooks and DM’s screen, for under $100. Yes, again, that’s both print and pdf! What is it? Why, it’s 1E meets Gygax’s original plans for the next version of the game. Start with the 1E rules, streamline the stuff that needs streamlining, add new classes and spells and monsters and magic, and off we go! If you liked Unearthed Arcana, you’ll love Adventures Dark and Deep.

Plus there’s a whole bunch of other stuff also on sale; expansion modules, adventures, my take on a fantasy China expansion rulebook (all completely compatible with most Advanced RPGs… ahem).

So head on over and check out the sale! I wrote most of it, but honestly, it’s a really good deal, and stuff you’ll get a ton of use out of for years.

In conjunction with the recent ADD/CotMA pdf sale, three lucky winners were going to get free hard copies of their purchases. All three winners have been contacted through OneBookShelf, but unfortunately I’ve only heard from two of them!

But we still have another winner to be heard from! If you’re reading this and bought a pdf during the sale, please look for an email from Chris Tang (from OBS) with the subject line “Free Book” and follow the instructions within.

If I don’t hear from our mystery winner within a week, I’ll be forced to draw another winner. I’ll also ask OBS to try to get in touch with him again.

Jonathan and Weird Dave, your books will be en route shortly. Thanks to everyone for participating!

As we head slowly into the summer months, I thought I’d do an impromptu sale, with a contest to boot!

Shipping to the United States is included. Outside of the U.S. you will be asked to make up the difference in shipping costs. But the books themselves are still free!

Purchases of titles that do not have a print version will not be included in the drawing. But if you get a print title, and want to try for a second copy, more power to you! The following titles have print options available:

This offer does not apply to the Adventures Dark and Deep bundle, but does apply to the Castle of the Mad Archmage digital OSR bundle.

You can get all our books, including our latest, Project Oasis, for 30% off at OBS’s GM’s Day sale this weekend. Just click here:

(Please note that Project Oasis will be on sale today only, so if you want to get it, don’t dawdle!) 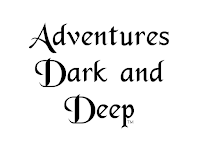 Right now, all BRW Games titles are on deep discount over at RPGNow.com.

But probably the best deals of the bunch are:

That’s crazy low. In fact, I’m pretty sure I screwed up the pricing when I set the titles up for the sale, so if you were on the fence about checking out anything in the catalog, now’s the time because it’s very likely they will never, ever be this cheap again.